Our objective of research was clinical score of different restoration design of I class enamel edge according to Black carious cavities classification. Object and methods of the research. 130 patients were divided into 3 groups, depending on cavity enamel edges design. In the I group we have formed a classic carious cavity with even, straight edges and without beveling, in the II group we observed external enamel beveling on the angle 45о to enamel-dental border, in the III one we formed internal enamel beveling. Carious cavities were formed out from microhybrid compositional light-solid material. The cavities’ restoration quality was examined each 6, 12 and 18 months after their implanting, according to the USPHS. Results of the research. Index «Anatomic closest form» after 6 and 12 months showed a perfect result in all groups. After 18 months this index level stays the same only in the ІІ research group, and in І and ІІІ ones this index can be described as “satisfactory”. The «Rugosity» index after 6 months was still present in 100% of restored teeth. After 12 months a satisfactory index was present only in 8,8% of all cases. After 18 months only patients from ІІІ group had 6,3% of restorations in non-satisfactying conditions. After 6 months all 100% of restorations were correspondent to the dental borders by color and transparency indexes. After 12 months patients from both І and ІІІ groups got these non-correspondent indexes in 3-3,6 times more than in the ІІ group. Then after 18 months number of restorations with color non-correspondence increased, mostly in ІІІ group (to 15,6%); about 9,4% of restorations had usual teeth color shades, and about 6,25% of restorations had full non-correspondence with teeth color shades and transparency. The «Edges adaptation» index was satisfying for all groups during first 6 months. The most interesting fact is that patients from ІІІ group had higher level of satisfaction with this criterion in 2 times more often than from 2 first groups. Those groups also more often got a defect of edges adaptation after 12 months. After 18 months a defect of edges adaptation can be observed mostly among representatives from І and ІІІ groups. «Edges’ color» index did not change at all among all groups of patients. General mark Alfa (A) after 12 months had the restorations from ІІ group. In the І and the ІІІ group only 2,6% and 6,3% of dental restorations correspondently are estimated as Bravo (В). After 18 months the edges’ color can be seen only in 5,1% of all restorations; and results of І group are twice bigger than in the ІІ one, and in ІІІ – in 1,6 an 3,2 times more than in І and ІІ groups correspondently. «Secondary decay» index was not observed in any of researching groups after 6 and after 12 months. However, a secondary decay was registered in the ІІІ group after 12 months. After 18 months we indicate increasing of this criterion, and, moreover, ІІ group patients suffered from secondary decay in 2-4,3 times more often than their partners in І and ІІІ groups, thus restorations need immediate change. «Discomfort / sensitivity» level after 6 and 12 months was corresponding to the mark Alfa (A). After 18 months patients from І and ІІІ groups suffered from bearable discomfort and ІІІ group suffered in 2,1 times more often than in І, and in II group this effect was totally absent. Conclusion. We can say without hesitation that those restorations which have external enamel beveling for edges of carious cavities (I class by Black classification) have the best results for patients. Upright design of enamel edge guarantees high restoration quality. Formation of enamel edge of cavity with internal beveling show worse results in quality. 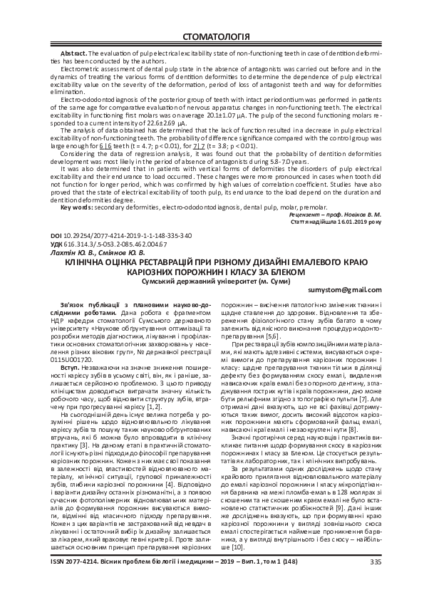