Bulletin of problems biology and medicine / Issue 1 Part 2 (149), 2019 / POSTOPERATIVE DELIRIUM IN PLANNED PATIENTS OF THE ELDERLY
Demiter I. M., Vorotyntsev S. I.


POSTOPERATIVE DELIRIUM IN PLANNED PATIENTS OF THE ELDERLY

One of the main tendencies of modern society is, without a doubt, becoming the aging population. According to WHO Director General Dr. Margaret Chan, for the first time in history, most people can expect their life to exceed 60 years. According to the forecasts of the WHO to 2050 the number of elderly people will increase to 38%.Koebrugge B and co-authors (2009) note that postoperative cognitive impairment, namely postoperative delirium (AML), affects hospital mortality. In addition, AML aggravates postoperative recovery, increases the amount of medical care, prolongs hospitalization, leads to prolonged cognitive violations or even permanent dementia. The available evidence suggests that in elderly patients undergoing urgent surgery, the incidence of AML is higher and ranges from 18% to 55%. Depending on the type of surgery, the data on the incidence of postoperative delirium differ. According to the data, delirium is often encountered after hip fracture surgery, cardiac surgery and operations on the gastrointestinal tract. The purpose of the study was to assess the incidence of postoperative delirium and to determine the association of possible risk factors in elderly and elderly patients with planned surgical interventions. Object and methods: after passing the Bioethics Commission on the basis of the Zaporizhzhya State Medical University and obtaining informed consent from patients, 32 patients (18 (56%) women and 14 (44%) men were consistently included in the one-center prospective study), age 60 years to 88 years of age, IIA-III classes for ASA, who performed routine surgical interventions for cholelithiasis (n = 15), inguinal and postoperative ventral kees (n = 17) under general or regional anesthesia. The initial evaluation of the cognitive status was carried out on the Mini-Cog scale, the level of deterioration - on the scale Frailty, the risk of delirium — on the scale of Delphi. After the operation, a daily evaluation of the cognitive status, the visual analogue scale pain (VAS), the level of sedation and aging on the Richmond scale, and postoperative delirium screening on the scale of the Confusion Assessment Method (CAM-ICU) The statistical analysis was conducted using the Statistica for Windows version 6.0. Results of the research and their discussion. In our study, the preoperative assessment of brittleness was 4.0 [3.0,4.0] points, indicating a decrease in functional reserve of patients. The duration of hospitalization of planned patients slightly depends on their fragility status (Spierman’s score rs = 0.252 p < 05000) and averaged 12.0 [9.0;15.0] days. The average cognitive status score was 4.0 [3.0,4.5] points, indicating mild to moderate cognitive impairment. The median risk of developing delirium was 4.0 [3.0,5.0] points. In the first day after the operation, the cognitive status was on average 3.0 [3.0,4.0] points. In the first five days of the postoperative period, the cognitive status of patients relative to the baseline level does not significantly change (p-value = 0.126). Postoperative delirium developed in one patient, which is 3% of the total for the second day after surgery. Conclusions. The incidence of postoperative delirium scans 3% of planned elderly patients. The cognitive status after the operation does not significantly change (p = 0,126). Prospects for further research. It is planned to conduct a study on the detection and prevention of postoperative delirium in urgent elderly patients. After all, the urgency of the operation is a significant risk factor for the development of the POD. 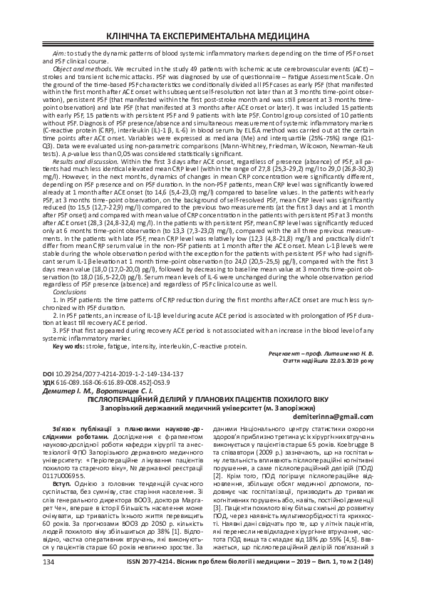