Bulletin of problems biology and medicine / Issue 2 (144), 2018 / SYNDROME OF VEGETATIVE DYSFUNCTION AS A BASIS FOR THE ARTERIAL HYPERTENSION DEVELOPMENT AND ITS SIGNIFICANCE IN THE MEDICAL-SOCIAL EXPERTISE OF CLEAN-UP WORKERS OF THE CHORNOBYL ACCIDENT IN THE REMOTE POSTACCIDENTAL PERIOD
Tatarenko O. M.

Purpose of the study: to assess the occurrence of vegetative dystonia (VD) in the liquidators of the consequences of the Chernobyl catastrophe (LChC) and determine the role of VD as a clinical and expert communication criterion arterial hypertension (AH) with the consequences of the Chernobyl accident. Object and methods. The analysis included data from 172 LChC, which explored Central Expert Commission in the period 2014-2016 for establishment causative relationship of AH with the effect of ionizing radiation and other harmful factors ChNPP. Results. 145 LChC has the established the causal link of the GC with the consequences of the accident on ChNPP (group 1), whereas in the 27 LChC the causal connection of the AH has not been confirmed (group 2). The diagnosis of VD was established in the period 1986-2010. On average, VD developed through 4,1±3,8 years after participating in liquidation work. The average dose of external exposure was 0,152±0,11 Gy (0,0002 – 1,2 Gy). 78,1% of LChC participated in the liquidation work in the period from 26.04.86 to 25.04.87, the rest (21,9%) – in the subsequent period. In 80,1% of patients of group 1 VD arose up to 5 years, whereas in the group 2 the early onset of VD (up to 5 years) was detected in only 44% of cases (p = 0,0003). The VD in patient of group 1 has been documented through an average of 3,8 years earlier than in the group 2 (p = 0,0004). In the group 1 VD become the reason for hospitalization in averaged 4,9 years earlier as a compared with a group 2 (p = 0,009). In group 1 42 (29%) patients died because of complications of AH, while the second group of such patients was 7% (p = 0,018). Thus, the risk of death from AH in the group 1 is in 5,09 times higher than in the group 2 (ОR = 5,09; p = 0,018). It was shown that in the group of 1 relative risk of VD development during the first 5 years after participation in the work on the elimination of the consequences of the accident was 5.1 times higher than in the group 2. Group 1 reliably needed inpatient treatment due to VD compared with group 2. According to the results of the relative risk assessment, it was found that in the presence of VD group 1 has statistically significantly higher risk of mortality, disability and probability of cerebral atherosclerosis. At the same time, there is a tendency towards an increased risk of cardiac arrest, acute cerebrovascular accident/transient ischemic attack and encephalopathy. At risk of detecting heart failure, no significant dependence was detected. Conclusions. VD and its development peculiarities can be used as a scientifically substantiated expert criterion of communication of AH with the consequences of the Chernobyl accident. It is necessary to carry out further researches for the scientific substantiation of clinical and expert criteria of communication of the most common diseases that lead to the loss of health and working capacity of the victims of the Chernobyl accident. 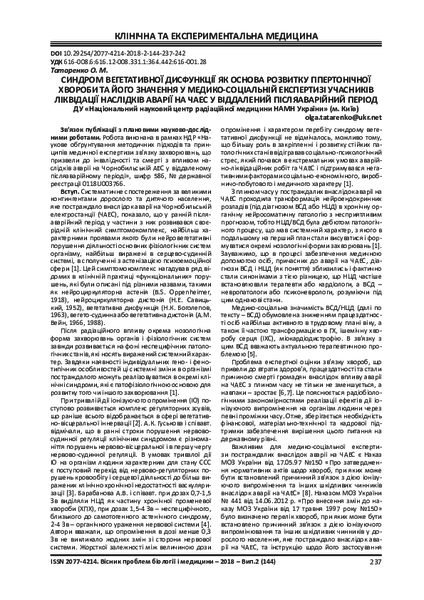