We performed a retrospective evaluation of the results of repeated ureteral reconstruction in patients with poor results of primary ureteral plasticity using a tubularized bladder flap. The study included 7 patients who underwent 8 repeated surgeries (7 of them were unilateral and 1 was bilateral) after insufficiency of primary reconstruction by a bladder flap. Repeated tubularized flap bladder surgery was performed in 3 patients, including one patient with bilateral repeated operation. 4 patients had the resection of a narrowed or obliterated part of the ureter with an end-to-end anastomosis between the flap and the ureter. The effectiveness of re-ureteral reconstruction was assessed retrospectively by analyzing complications and long-term treatment outcomes. The length of ureteral defects varied from 0.5 cm to 3.5 cm (average 2.0 ± 1.3 cm). The main reason for the poor outcome of the primary operation were necrotic and scarring of the distal part of the ureter (87.5%). In one (12.5%) case, we noted sclerosis of the distal part of the bladder flap. The length of the repeated bladder flap ranged from 7 to 18 cm (average 12.3 ± 4.8 cm). The overall incidence of intraoperative complications reached 25.0% (iliac artery injury, bleeding). Postoperative complications were observed in 3 (37.5%) patients (gradation I or II according to Clavien-Dindo). No specific complications, including severe dysuria or chronic urinary retention, were detected in the observed patients. The total number of good long-term outcomes was 87.5%. Repeated reconstructions of the ureter with preservation of the primary bladder flap or with the formation of a repeated flap are an effective method of correcting the negative results of primary Boari surgery. 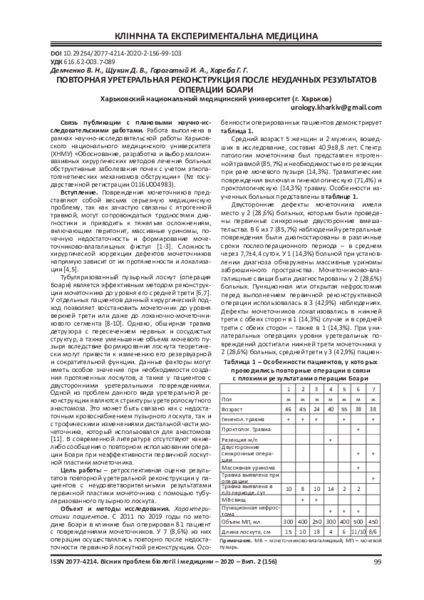