The study of pathogenetic pathways of gastroenterological pathology in patients with type 2 diabetes mellitus (T2DM) and development of differentiated treatment approaches is relevant task of modern medicine. Research aim was to study the state of antioxidant system, resistance of the gastric mucosal barrier, and endogenous toxicity in patients with chronic antral gastritis (CG) and concomitant T2DM considering Helicobacter pylori (HP) status comparing to patients with CG without DM. Research object and methods. 172 patients with endoscopically and histologically confirmed CG were enrolled into the study, 92 out of them had compensated or subcompensated T2DM. According to the HP status all patients were divided onto 4 groups: І (n=71) – had HP(+) CG and T2DM; ІІ (n=21) – had HP(-) CG and T2DM; ІІІ (n=48) – patients with HP(+) CG who had no T2DM; IV (n=32) – those with HP(-) CG who had no T2DM. According to the prescribed treatment patients of the I and III groups were further subdivided: groups І-А (n=35) and ІІІ-А (n=24) underwent standard triple anti-Helicobacter therapy (AHBT); patients in groups І-В (n=36) and ІІI-В (n=24) were additionally prescribed Eupatilin 60 mg (“Stillen”) for 28 days to AHT. In blood serum before the treatment and on the 28 day after the treatment oxidatively modified proteins (OMP), catalase, molecules of the average mass (MAM), free fucose and N-acetylneuraminic acid (NANA) were measured. To objectivize normal ranges, we additionally formed the group of almost healthy (AH) individuals (n=22). Results. The mean age of patients in groups І, ІІ, ІІІ and IV was 62.41±8.95 years, 58.71±8.42 years, 55.88±12.96 years and 51.16±13.62 years respectively. The distribution of male/female in group І was 48/23, group ІІ – 15/6, group ІІІ – 23/25, and group IV – 23/9. At the moment of the first examination the mean value of fasting glucose level in the group I was 7.12±2.12 mmol/L, HbA1c 6.37±0.92%, group ІІ – 7.39±2.65 mmol/L and HbA1c 6.53±0.97%. The presence of concomitant T2DM and НР infection in patients with CG worsens all investigated markers, which highlights the need in therapy intensification in case of comorbidity. Thus, in patients of group I MAM level was 1.1 times more, fucose – 1.6 times more, NANA – 3.6 times more, OMP – 1.3 times more on the background of catalase rise 1.3 times more in comparison to the patients of group IV (p<0,05). The last two readings indicate the inability of antioxidant system to reduce oxidative stress despite of its higher activation. HP infection in patients with CG and concomitant T2DM doesn’t have a significant influence on MAM, catalase and OMP. So probably, these changes in patients of the group I were caused by mechanisms of T2DM. Otherwise, HP infection in patients with T2DM leads to NANA and fucose rise 1.1 times more, which shows the role of HP in disturbances of gastric mucosal barrier. There was a correlation between fucose and NANA levels in patients of the I and II groups with concomitant T2DM (r=+0.305, p=0.01 та r=+0.784, p=0.00003 in patients of groups І and ІІ respectively). Additional Eupatilin prescription to AHT in the group І-В provided intensified positive changes in comparison to I-A group: catalase level was additionally increased 1.2 times more, OMP were decreased 1.2 times less, NANA was decreased 3.2 times less and fucose decreased 1.8 times less (p<0.05). HP eradication was achieved in 83,3% patients who took AHBT with Eupatilin, and in 77,1% who underwent AHT without eupatilin. Thus, additional Eupatilin prescription to the course of AHBT in patients with HP-associated CG and concomitant T2DM allows to normalize the state of gastric mucosal barrier resistance and to improve antioxidant defense of the organism. 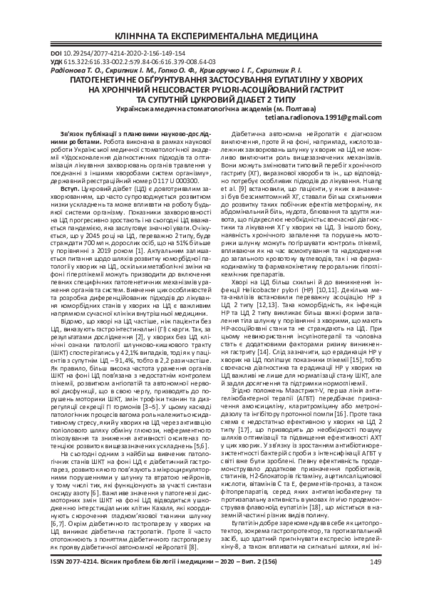