The purpose of the work is to analyze the results of the use of endovascular treatments for pulmonary artery atresia. Object and methods of research. Treatment of this heart defect in the State Institution «National Institute of Cardiovascular Surgery named by М.M. Amosov NAMS of Ukraine» with endovascular application began in 2006. During this time 138 patients were operated, 58 of them female (41.3%) and 81 (58.6%) male. In this case, endovascular methods – 23, in the open heart – 115. The average time in hospital was 25+16.3 days. In total, 115 (patients were operated on in the open heart). Of these, 62 (54%) were male and 53 (46%) were female. On the day of surgery, the average age of these patients was 607.8±1023.7 days, respectively; 8,8±8,1 kg The average bed day held in the hospital was 26+18,6. In the case of endovascular surgery, the mean age at the day of surgery for 23 patients (18 male (77%) and 5th (23%) female) in the first stage was 220.5+650.2 days, weight – 5.0+ 4.4 kg. The number of days spent in hospital is 22+5.7 days. In the treatment of pulmonary arteria аtresia, a stepwise procedure is used, correcting part of the defect at each stage and thereby reducing the traumaticity of the operation. In our case, the correction of the defect was performed in the open heart and using endovascular methods of treatment. After endovascular interventions, no fatal effects were observed. Open-heart surgery was performed in the event that endovascular interventions could not be performed. The condition of such patients was usually more severe. It should also be noted that the open heart surgery itself is serious trauma to the body. Due to the above postoperative period in this part of patients more often proceeded with complications. As a result of the more severe preoperative condition of the patients and the most surgical trauma in some cases, with open heart interventions, some patients did not undergo surgery. As a result, the total mortality in the group of patients who underwent open-heart surgery was 12%. The average bed day of 115 patients operated on in the open heart was 26+18.6 days (maximum 215, minimum – 5), 23 patients with endovascular intervention – 22.0+5.7 days (maximum – 34, minimum – 4). In addition, in 7 cases, such surgery was supplemented by the Rashkind procedure. In case of recurrent surgery after 6 months, VAP stenting was performed. Repeated surgical interventions were accompanied by improvement of the condition and they were discharged from the clinic in satisfactory condition. Conclusions. 1. Endovascular surgery for pulmonary arteria аtresia is the surgery of choice that allows you to prepare the patient for the next stage of treatment. 2. Endovascular interventions in ALA are low-traumatic, which increases the chances of patients with complicated anatomy to survive despite their difficult condition upon admission to the hospital. 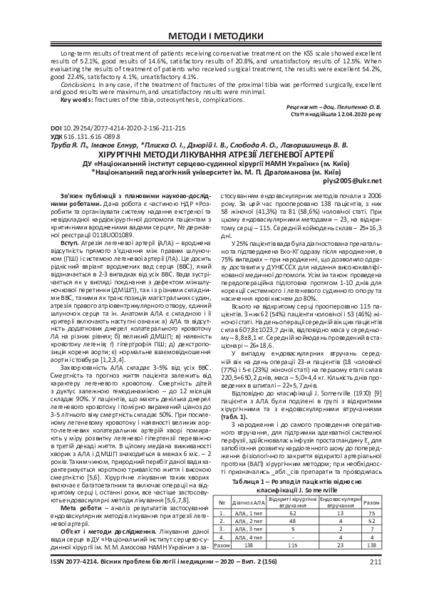