Pregnancy loss is one of the main problems in obstetric practice. The aim of the study. To evaluate the genital microbiocenosis in pregnant women with cervical insufficiency who had a history of infertility associated with anovulation. The object and methods of research. The study included 60 pregnant women with cervical insufficiency in the II trimester of pregnancy, which formed the basic group. All these patients had a history of infertility associated with anovulation. In this group the pregnancies occurred due to the use of assisted reproductive technologies. The control group involved 30 pregnant women without cervical insufficiency and infertility and with physiological gestation. Inclusion criteria: single pregnancy, pregnancy after treatment of infertility associated with anovulation, cervical insufficiency, patient’s written consent. Exclusion criteria: multiple pregnancy, antiphospholipid syndrome, thrombophilia, ovarian hyperstimulation syndrome, cytogenetic causes of miscarriage after in vitro fertilization; male infertility; tubal, cervical, immunological, unspecified infertility, connective tissue dysplasia, increased risk of chromosomal fetal abnormalities by results of I and / or II genetic screening. Bacteriological examination of vaginal discharge was performed. Results. The mean age of pregnant women was statistically different in both groups – 31.73±0.66 years in the basic group and 27.30±0.92 – in the control one (p<0.001). Primagravida women were the majority of the patients in both groups – 68.33 % in the basic group and 56.67 % – in the control one. Two pregnancies had respectively 16.67 % and 26.67 % women, three or more pregnancies – 15.00 % and 16.67 %. The primary complaints of pregnant women with cervical insufficiency and infertility in the anamnesis were the increased vaginal discharge in a moderate or significant amount – 73.33 % of the surveyed persons. Vaginal discharge with odor disturbed 45.00 % of the patients in the basic group, feeling of the burning and itching in the vagina – 28.33 %. The discomfort in the lower parts of the genital tract was noted by 46.67 % of pregnant women. In the control group, only 10.00 % of women complained on increased vaginal discharge, 6.67 % persons reported about vaginal discharge with bad smell, 3.33 % complained of lower genital tract discomfort. The results of bacteriological examination of vaginal discharge indicate that 61.67 % of pregnant women in the basic group had conditionally pathogenic flora in high concentration, as well as pathogenic microorganisms, whereas in the control group no such cases were detected. The spread of polymicrobic associations was found in 48.33 % of pregnant women with cervical insufficiency, the combinations of two or three pathogens were determined respectively in 35.00 % and 13.33 % of persons. In the basic group these microorganisms were found mostly: Candida spp. – 40.00 %, Peptostreptococcus spp. – 28.33 %, Gardnerella vaginalis – 20.00 %, Streptococcus spp. – 15.00 %, Escherichia colli – 11.67 %, Bacteroides spp. – 10.00 %, Staphilococcus spp. – 5.00 %. Among pathogenic microflora Candida was determined only in 13.33 % of healthy pregnant women. A number of the pregnant group, which has lactic acid bacteria at normal concentration, such as Lactobabacillus spp. and Bifidobacterium spp. were respectively in 1.9 (45.00 %; χ2 =12.67, p<0.001) and 2.0 times less (40.00 %; χ2 =11.30, p<0.001) than in the control group, respectively. Conclusion. Pregnant women with cervical insufficiency and infertility associated with anovulation have disorders of vaginal microbiocenosis, manifested by the presence of pathogenic and increased concentrations of conditionally pathogenic microflora. This can be another additional complication of pregnancy loss. 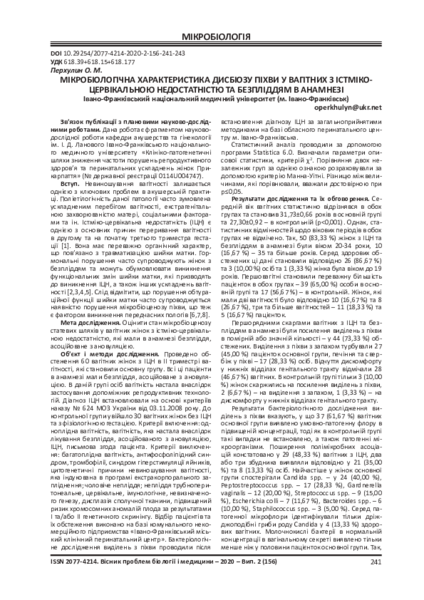