It is important to use a combination of effective modes of both cooling and thawing to obtain high rates of morphofunctional state of cells after cryopreservation. The aim of the study was a comparative assessment of the thawing regimes on the morphofunctional characteristics of the rat seminiferous tubules after cryopreservation with a slow uncontrolled cooling rate. Object and methods. Samples of seminiferous tubules were obtained mechanically from both testes of immature rats (n=50, weighing 50±15 g, aged 7-8 weeks), incubated in cryopreservation media (fibrin gel with 0,7M glycerin) for 30 min (4°C) and freezed using slow uncontrolled cooling to -70°C for 40 min followed by immersion in liquid nitrogen. The following regimes were used for thawing: Ithawing at room temperature (22°C); IIpre-incubation in liquid nitrogen vapor and thawing in a water bath at 40°C; IIIpre-incubation in liquid nitrogen vapor and thawing in a water bath at 50°C. Intact control was used as a comparison group. The histological structure and the metabolic activity (MTT test, LDH and activity of antioxidant defense systems) of spermatogenic epithelium cells was evaluated. Results. After freezing and thawing at 22°C pronounced histological changes were detected. The specific zonation of the spermatogenic layer was absent; a sharp retraction of cells, foci of epithelial destruction and necrosis were detected. Pycnosis was observed in almost 82,3±5,8% of cells. Desquamation of the epithelium, including total, was determined in 76,4±7,2% of the studied tubules. Thawing of cryopreserved samples in a bath with a water temperature of 40°C caused moderate damage to the histostructure: moderate cell retraction; partial epithelium desquamation in 30% of the tubules; pycnosis in 25,4±7,5% of cells. After thawing at 50°C pronounced retraction of spermatogenic epithelial cells and its total desquamation was detected in 65,1±7,3% of the studied tubules. Pycnosis were observed in 43,8±6,8% of cells. The average density of spermatogenic epithelial cells was reduced relative to intact in all studied groups. However, this indicator underwent the smallest changes after thawing at a temperature of 40°C. In comparison, thawing at 22°C and 50°C was in 2.1 and 1.3 times less efficient, respectively. The results of the study of the functional characteristics of the seminiferous tubules showed that the indicators of metabolic activity (MTT test, LDH and activity of antioxidant defense systems) in the samples thawed by II regime were higher than by regimes I and III. However, in all studied groups, the functional parameters after freezingthawing remained significantly lower than in intact control. Conclusion. The thawing in a water bath at 40°C with pre-incubation of samples in liquid nitrogen vapor allows effective preserving the morphofunctional properties of cryopreserved seminiferous tubules. 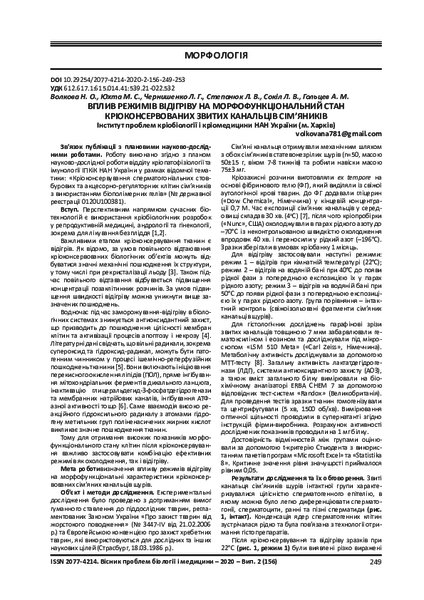