The female reproductive system, namely eggs, begins to form in the womb. This is a very important period and it depends on the woman’s future reproductive health. Pathological phenomena during fetal development include disorders of maternal nutrition, bad habits, stress, chronic diseases, maternal age, fetoplacental insufficiency (FPI). FPI, which leads to disruption of gas exchange, hormonal function placental complex, transport nutrients and other disorders in pathological conditions determining the development of the placenta intrauterine fetal hypoxia, delay its growth and development and adverse perinatal outcomes. Proved that the unfavorable conditions for fetal development constantly forming gene expression, thereby influencing the structure and function of various organs. But the formation of ovaries woman has in the embryonic period, no less important stage in the reproductive function is the puberty. At present, it is not known how FPI in the mother affects the ovarian histostructure during the reproductive system. It is not clear how the age of a woman at the time of pregnancy on the background of FPI affects the reproductive system of female offspring. Of course, such symptoms as FPI requires the use of drugs pregnant, but there are many mono for the treatment of such conditions. We have developed a new pharmaceutical composition of four components for the treatment of FPI in females. The purpose of this study was to investigate the ovarian histology of pubertal offspring of females born to mothers of young and mature reproductive age with FPI, and to evaluate the degree of correction of a complicated pregnancy by a pharmaceutical composition. The healthy, Vistar mature rat’s females of young (3-4 months) and mature (8-10 months) reproductive age with normal four-to five days estrus cycles have been used for both sex offspring obtaining. The presence of the sperm cells in morning vaginal swabs has been considered to be the first day of pregnancy. 8 groups for 7 pregnant females in each have been formed: Groups I and II – intact animals of young and mature reproductive age; Group III and IV – females with experimental FPI of young and mature reproductive age accordingly; Groups V and VI – young and mature animals with experimental FPI treated by pharmaceutical composition which contains nontoxic active pharmaceutical ingredients of FPI basic therapeutic group – amino acid (L-arginine), dicarbonic acid (succinic acid), vitamins (folic acid) and vasoactive drug (dipyridamole). Experimental animals have received treatment from 11 to 19 day of pregnancy. Groups VII and VIII – young and mature animals with experimental FPI treated by drug of comparison – “Dipyridamole”. The modeling of FPI has been carried out by daily subcutaneous introduction of 50% tetrachlormethane oil solution in dose of 2 ml/kg of body weight from 12 to 18 day of pregnancy. It has been shown that, regardless of maternal age, FPI has a negative effect on the ovarian histology of offspring of offspring, which may affect fertility in the future. In particular, the number of follicles decreases in mothers against the background of FPI and the level of atretic follicles visually increases. With the introduction of the pharmaceutical composition to both young and reproductively mature pregnant female rats on the background of FPI, visually contributed to an increase in the reserve of folliculogenesis and a decrease in the process of atresia of the follicles. The drug comparison “Dipyridamole”, to a lesser extent, activated the increase in the reserve of folliculogenesis compared with the pharmaceutical composition. 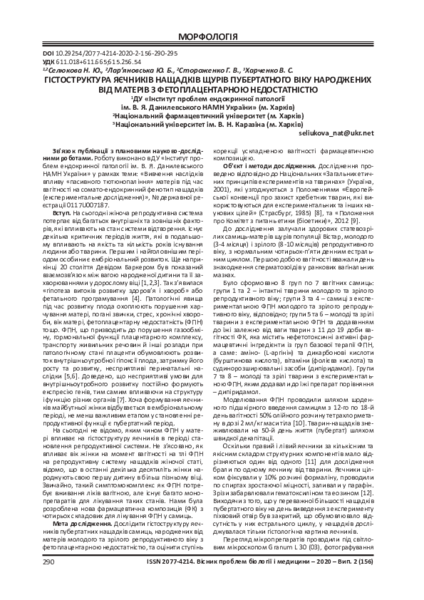