STATE OF CONTRАST SENSITIVITY IN HYPERMETROPIA IN SCHOOL-AGE CHILDREN

The purpose of the study to establish the possibility of using contrast sensitivity (СS) in the diagnosis of refractive disorders of the visual system, namely in the diagnosis of hypermetropia in students of different age groups. Object and methods. The age-related periodization of human development adopted at the VIIth conference with the problems of age-related morphology, physiology and biochemistry (1965) is used. As the load on the visual apparatus begins to increase from about 4 years, our study included persons belonging to the following age groups: first childhood (girls and boys aged 4-7 years), second childhood (girls aged 8-11 years and boys aged 8-12 years), adolescence (girls aged 12-15 years and boys aged 13-16 years) and youth age (girls aged 17-20 years and boys aged 17-21 years). Considering the studied contingent (children, adolescents and adolescents attending secondary school), the distribution in the studied age groups was as follows: girls aged 6-7 years made up the D1 age group, boys aged 6-7 years – the X1 group, girls aged 8-11 years – group D2 , boys aged 8-12 years – group X2 , girls aged 12-15 years – group D3 , boys aged 13-16 years – group X3 , girls aged 16-17 years – group D4 , boys aged 17 – Yu group. In each of the 8 age groups, we conducted a study of the state of refraction and contrast sensitivity. Total in the study was conducted with the participation of 744 students, of which 393 are female and 351 are male. The study participants were divided into age groups as follows: group D1 – 66 girls, group D2 – 141 girls, group D3 – 126 girls, group D4 – 60 girls, group X1 – 51 boys, group X2 – 155 boys, group X3 – 91 boy , group Yu – 54 heroes. In this paper, each of the subjects was determined by visual acuity using Golovin-Sivtsev tables, contrast sensitivity (CS) using a table contrasting optotypes. These indices were determined for each eye separately. Given that there is no significant difference between the data samples obtained in the study of the right and left eye, the numerical characteristics in the work are presented solely by the results of studies of the right eye. СS values <2 were considered as evidence of pathological changes, CS values = 2.5 were considered as the boundary between pathology and norm, CS values ≥3 were considered to be in accordance with the norm. The absence of refractive disorders in the group of female students was characterized by only 47.84% of persons (n = 188), and in the group of male students – 50.14% of persons (n = 176). Hypermetropia was detected in the female group of 17.05% (n = 67) and in the male group in 17.38% (n = 61). The incidence of hypermetropia in the group of girls and boys did not become statistically significant (χ2 = 6.738; p = 0.081). Among students of different age groups, 11.70% (n = 46) of the female subjects studied and 11.97% (n = 42) of the male group showed a simultaneous decrease in the CS index to 2 and below and hypermetropia. In groups of female students and the male subjects with hypermetropia were numerically predominant in those who were first diagnosed with refractive error using the CS method, which was confirmed by the determination of visual acuity. The CS method has a long history of development. The most appropriate methods of study of CS are used in the work presented in the section “Material and research methods”, which have been successfully used by us. The analysis of the obtained results shows that there is a correlation between the percentage of the first detected disturbance of the refraction of the eye in the form of hypermetropia and CS <2. This indicates that the CS method can be successfully used for screening studies of hypermetropia. These data are corroborated by the data on the numerical predominance of persons with newly diagnosed hypermetropia in most age groups. The results obtained suggest that it is possible to use a method of determining the CS status using a table of contrasting optotypes for early preclinical diagnosis of refractive disorders in school-age children. 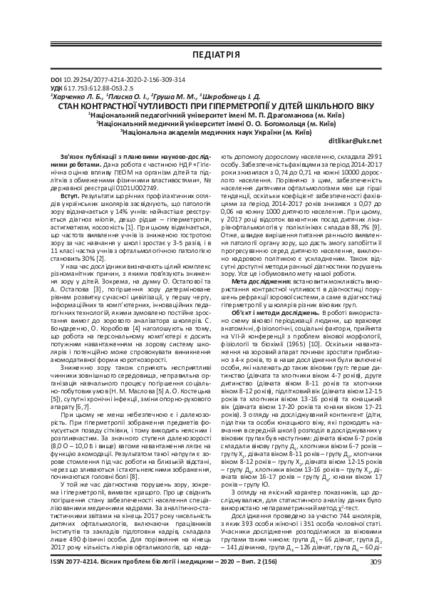