Contact sports (football, hockey, boxing, mixed martial arts, rugby and American football) are sports with high frequency of traumatic brain injuries (TBI). But a significant part of sports related concussions (SRC) are below the level of clinical diagnosis of SRC or are unnoticed. The most severe cumulative consequence of SRC is chronic traumatic encephalopathy (CTE). CTE is a progressive neurodegenerative disease accompanied by motor, psychological and cognitive disorders. Today, CTE widely resonates in the science world due to suicides among famous athletes. Despite the fact that this disease has been studied for almost 100 years, the diagnosis of CTE can be made only after autopsy. That is why the study of a wide range of clinical manifestations of CTE plays an important role. The aim of the study. To establish long-term cognitive consequences of TBI in ice hockey players. Object and methods of research. Retrospectively, we tested retired 20 ice hockey players (17 men and 3 women). All the players were winners of the Ukrainian Ice Hockey Championship and members of the national teams of Ukraine. The average age is 34 ± 9.4 years, the youngest of them is 21 years old, the oldest is 51 years old. Also, players were divided into age groups: 18-28 years, 29-38 years, 39 and older. All athletes had at least one SRC (7 athletes had 1 SRC, 2 SRC – 3 athletes, 3 SRC – 6 athletes, 4 and more – 4 athletes). 7 hockey players were hospitalized after having had SRC (which indicates the severity of SRC). All athletes completed a questionnaire with their team doctor, which included: passport part, sports history, history of SRC, a mini mental scale evaluation (MMSE) and «the clock drawing test». Results. Dividing athletes into groups according to the number of SRC received during their professional career, we compared their MMSE result. The results of the analysis showed a statistically significant decrease in the value of MMSE with an increase in SRC more than 1 during a sports career. Thus, in the group with 1 SRC the value of MMSE was 28.7 (1.38) points, while in the group with 2 or more SMS it was equal to 26.7 (1.15) points (p <0.05). While analyzing the level of MMCE, depending on the sports specialization in hockey, statistically significant differences were found. Therefore, MMSE goalkeepers scored 26.6 (0.6) points, strikers – 27.8 (0.4) points, defenders – 28.2 (0.7) points (p <0.05). In addition, the fact of hospitalization indicates clinically significant severity of a history of SRC. Having retrospectively collected data on hospitalization of hockey players after SRC, there was also a decrease in the value of MMSE in those with a history of hospitalization. Thus, in the group of people with hospitalization MMSE was 27.1 (1.39) points, without hospitalization – 27.9 (1.7). An analysis of the relationship between age groups and the nature of cognitive impairment has also been made. No statistically significant data was found, indicating no relationship between age and severity of cognitive impairment. Significant statistic connection (n = 20, correlation coefficient rs = – 0.40; p <0.05) has been found between the number of SRC and the indicator and MMSE test and between number of SRC and «the clock drawing test» (n = 20, correlation coefficient rs = – 0.10; p <0.05). These data suggests that the amount of SRC affects cognitive functions. Conclusions. Our study has outlined connection between cognitive impairment in ice-hockey players and SRC. Despite the fact that the world literature emphasizes the importance of cognitive testing both to guide athletes before and after SRC, and to assess the long-term effects of SC, there is no one diagnostic protocol and it requires unification and mandatory inclusion in the diagnostic program for the athlete who had SRC. 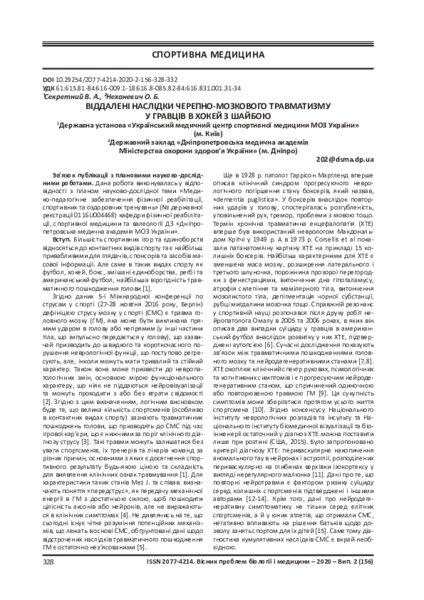