The article describes the life and career of Bartolomeo Eustachio. Future great scientists was born in Italy. At the insistence of his father received an excellent liberal arts education. After receiving a degree in medicine, he devoted himself to the study of anatomy. Bartolomeo previously drew attention to their skills and knowledge, and was a doctor of cardinals Borromeo, and Giulio della Rovere. Was later selected for the post of Professor of anatomy in Rome. The students loved him and admired his fascinating lectures. Also this position gave him time and access to human corpses, which in those days was not easy to obtain. Was an opponent of Vesalius. The first works of Eustachio was “Ossium examen” and “Demotu capitis”, written in 1561, targeting antisalinity Vesalius. In 1562 and 1563 the years of Eustachi produced a series of treatises on the kidneys (De renum structura), the auditory organ (De Auditus Organis), the venous system (De vena quae azygos graecis dicitur) and the teeth (De dentibus). Then they were published together with two earlier works of Bartolomeo Opuscula anatomica (1564). It should be noted that a previously published autopsy reports were previously made on animals, the book is of Eustachia De dentibus was the result of the autopsy of human fetuses, infants and the elderly, in which he described the number, location and types of teeth in babies and adults. Eustahio is considered the first comparative anatomist. The anatomical achievements of Eustachio were great, but most of his work was posthumous. In 1552, Eustahio, with the help of Pierre Matteo Pini, prepared a series of 47 engraved copper plates that illustrated the results of many sections of Eustahio. The first eight large plates, designated Tabula Prima-Octava, were used in Opuscula anatomica to represent the kidneys, unpaired vein and its branches, veins of the arm, heart, and Eustachian valve (valvula venae cavae in the right atrium), as shown in Tabula Prima-Octava. The remaining 39 were lost, and then found and released after the death of Bartolomeo. Eustahio died on the road to the Cardinal (as mentioned above he was his doctor) on August 27, 1574 at the age of 54 years. 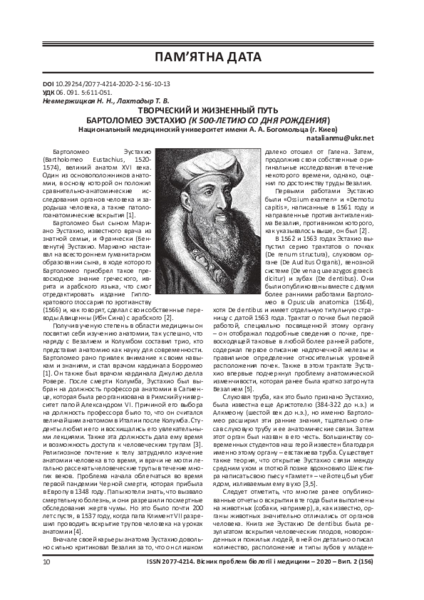