Post-stroke fatigue (PSF) is one of the most frequent complications of acute cerebrovascular events (ACE). According to recent findings PSF has heterogeneous etiological and pathogenic background. Toll-like receptors (TLR) belong to pattern recognition receptors of innate immunity that take active part in inflammatory and immune reactions. Brain tissue damage (including strokes) leads to release of various endogenous ligands, the latter bind to TLR-4 and through activation of nuclear transcription factor кВ stimulate transcription of genes that encode numerous pro-inflammatory substances (cytokines, chemokines, adhesion molecules, matrix metallopeptidases-9, etc.). At present in stroke patients it has been described two functional single nucleotide polymorphisms (SNP) of TLR 4 gene – 896A/G (Asp299Gly; rs4986790) and 1196C/T (Thr399Ile; rs4986791). Objective: to study the distribution of SNP 896A/G TLR 4 gene genotypes and investigate association between this SNP and peculiarities of PSF clinical course depending on PSF time-based characteristics. Object and methods. It had been investigated 120 patients with ACE (89 with ischemic stroke, 10 with hemorrhagic stroke and 21 with transient ischemic attack). 43 patient hadn’t PSF and 77 patients were diagnosed with PSF. PSF was established by use of questionnaire – Fatigue Assessment Scale (FAS). On the ground of the time-based PSF characteristics we conditionally divided all PSF cases as early PSF (manifested within the first month after ACE occurrence with subsequent self-resolution not later than at 3 months time-point observation) – 26 patients, persistent PSF (manifested within the first post-stroke month and was still present at 3 months time-point observation) – 29 patients and late PSF (manifested at 3 months after ACE occurrence or later) – 22 patients. SNP 896A/G of TLR 4 gene was investigated by polymerase chain reaction. The polymorphic site of the TLR4 gene (896A/G) were detected by electrophoresis in 3% agarose gel. The gel was stained with ethidium bromide, followed by visualization of the results in ultraviolet light. Results and discussion. Generally, A/A genotype was present in 109 patients (90,8%), A/G genotype – in 11 patients (9,2%). There were no homozygotes for G allele, maybe due to a relatively small cohort of patients included in the study. SNP 896 A/G of TLR 4 gene genotypes distribution in non-PSF patients, in all PSF patients as well as in patient’s sub-groups with certain time-based PSF characteristics corresponded to the Hardy-Weinberg equilibrium. The frequencies of SNP 896A G TLR4 gene alleles and genotypes didn’t significantly differ from each other depending on PSF presence or absence. In patients with persistent PSF, it had been revealed significantly more frequent (p<0,05) presentation of G allele and A/G genotype in comparison with patients who has early or late PSF. According to logistic regression analysis, A/G genotype was associated with increased in 9.5 times (confidence interval 1.1- 82.4; p=0.04) relative risk of PSF persistence compared to A/A genotype. So, G allele may be a risk factor that takes part in PSF clinical prolongation beyond acute period of ACE. Moreover, A/A genotype carriers had significantly reduced PSF intensity, according to FAS, at 1 month (39,0 (33,5-41,3)), at 3 months (33,5 (29,8-38,3)) and at 6 months (33,0 (21,0-36,5)) after ACE occurrence, compared to initial PSF values at hospital stay (44,0 (37,0-45,0)), while carriers of A/G genotype had statistically stable PSF intensity over 6 months post-stroke period. So, the presence of G allele SNP 896A/G of TLR4 gene can be used as a prognostic sign of PSF persistence beyond acute period of ACE in patients who had been diagnosed with PSF during hospital stay. However, this issue requires further elaboration of the possible immune-inflammatory mechanisms underlying this phenomenon. Conclusions. 1. SNP 896A/G of TLR4 gene hadn’t associations with increased risk of PSF during different periods after ACE occurrence. 2. G allele SNP 896A/G of TLR4 gene was associated with significantly increased risk of PSF clinical prolongation, at least during the first 3 months after ACE occurrence. 3. A allele SNP 896A/G of TLR4 gene was associated with significant decreasing of PSF intensity during the first 6 months after ACE occurrence. 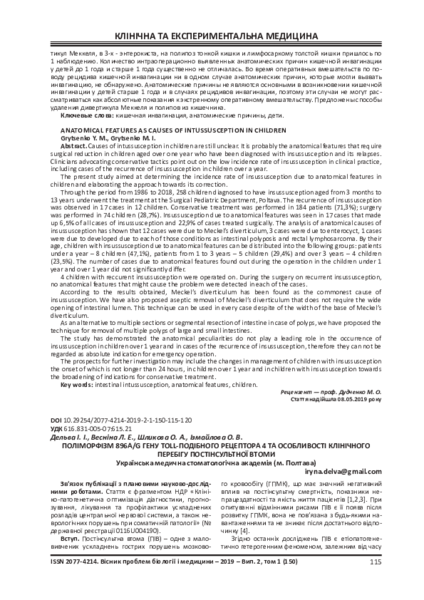