CLINICAL FEATURES OF THE DISMETABOLIC NEPHROPATHY OF CHILDREN

Dysmetabolic nephropathy is a group of diseases, with variable etiology and pathogenesis, characterized by the presence of multiple metabolic disorders. The frequency of dysmetabolic nephropathy among children in recent years ranges from 11% to 13%, which is much higher than in the early 2000s. Discussed pathology clinical features, due to the possible chronization and transformation into chronic pyelonephritis, have not been studied enough. The purpose of our investigation was to study the dysmetabolic nephropathy clinical features of the children of different age. The object and methods of research. A total amount of 764 children aged from 1 to 18 years, who was out- and in- patient clinic at Regional Children’s Hospital in Ivano-Frankivsk, for the period from 2016 to 2019 years, were included in the clinical survey. The diagnosis was confirmed on the basis of the criteria by Ivanov D. D. and Korzh O.M. Patients were formed to observation groups (oxalate, oxalate-calcium, phosphate, and uric nephropathy) according to clinically, biochemically, and also instrumentally confirmed diagnoses. For statistical analysis of the results was used Statistica for Windows version 6.0 general-purpose software (Stat Soft inc., USA). The normal distribution was checked using Kolmogorov-Smirnov test. The significance of differences was determined using Student’s t-test and Fisher’s F-test for parametric data. Results and discussion. Was detected predominance of oxalate (64.0%) and calcium oxalate (24.0%) nephropathy. Phosphate nephropathy had 8.0% and urate – 4.0%. We found some features of this pathological condition: irregular and inadequate drinking regime (80.0% and 75.0%); eating foods with excess oxalate in food (rhubarb, spinach, chocolate, strong tea) – 65.0%, obesity – 50.0%, the presence of an aggravated family history of bilestone disease (70.0%), hypertensive illness (68,0%), diabetes mellitus (55%). 88.0% of patients had gastrointestinal tract chronic diseases. According to gender, in all age groups, dysmetabolic nephropathy often affects girls (75.0% and 25.0%, p <0.05). The duration of the disease was 3.64 ± 1.3 years %, and ranged from 2.0 months. up to 6 years. Among the comorbidities, the most common were chronic biliary pathology (80.7%), urinary tract infections (73.3%) and vulvovaginitis (67.7%). Was documented the predominance of isolated urinary syndrome (100.0%). The main complaints of the patients were: frequent or voluntary urination (8.0% and 75.0%, p> 0.05), painful urination (70.0%), and pain in the lumbar region (68.0%). Children had violations of posture (50.0%), kyphosis (25.0%), and multiple stigmas of disambiogenesis (25.0%), which directly indicates the syndrome of undifferentiated connective tissue dysplasia. Conclusions. Dysmetabolic nephropathy is important problem of pediatrics and pediatric nephrology, due to their high frequency in the population, the general increase in last decades, the possible progression of pathology as a predictor of urolithiasis, chronic pyelonephritis, etc. The results of our study, based on a survey of 764 children aged 1 to 18 years, suggest the following clinical features of the dysmetabolic nephropathy in children: prevalence of oxalate (64.0%) and oxalate-calcium forms (24.0%); the presence of such comorbidities as chronic gastrointestinal diseases (88.0%), urinary tract infections (73.3%), vulvovaginitis (67.7%); the presence of non-specific complaints – frequent or involuntary urination (8.0% and 75.0%), painful urination (70.0%), pain in the lumbar (68.0%); dominance of isolated urinary syndrome (100.0%), as well as the presence of pain (90.0%), intoxication (75.0%), hyperthermia (68.0%). The obtained data indicate the discussed pathology multidisciplinary and require diagnostic and therapeutic attention not only of pediatricians and pediatric nephrologists, but also of family practitioners, pediatric gastroenterologists, cardiologists, obstetricians and gynecologists. 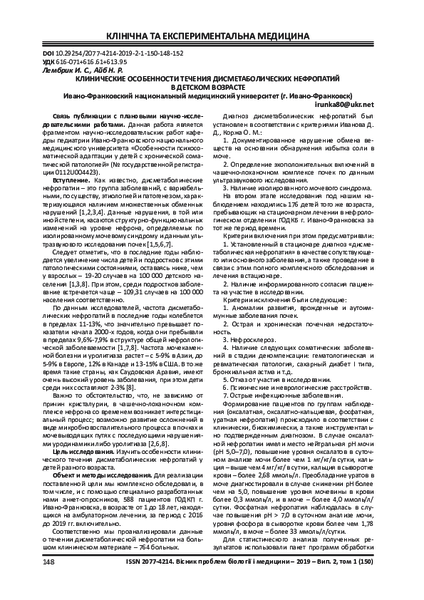