Combatting infections caused by Pseudomonas aeruginosa (P. aeruginosa), is now considered to be a topical problem in modern medicine. A number of mechanisms of adaptation and survival of the bacteria and natural resistance to several classes of antibiotics are a danger to the lives of patients and are considered a threat to public health. Another important feature of P. aeruginosa strains is the extremely high ability to form biofilm, the structure and physiological properties of which provide increased resistance to antimicrobial agents and help to overcome the protective forces of the macroorganism during infection. The crisis of monotherapy with antipyocyanic agents induces to consider combined antibiotic therapy as one of the effective methods for controlling this disorder. The purpose of the study was to assess the combined effect of polymyxin with major anti-pyocyanic agents on the circulating strains of P. aeruginosa. Object and methods. To perform the tasks, the study involved reference strain P. aeruginosa ATCC 27854 and 33 circulating strains isolated from clinical material from patients with purulent-inflammatory diseases. The study of the ability to form biofilms by microorganisms was carried out using a plate method according to O’Toole G., 1999. Determination of the sensitivity of the test strains to antimicrobial agents was carried out using Bauer-Kirbi disc diffusion method on Muller-Hinton medium using commercial disks and serial dilutions. The study of the effectiveness of combinations of anti-pyocyanic agents and their effects on biofilm formation of P. aeruginosa strains was carried out with the determination of FIC (fractional inhibitory concentration) index. In FIC≤0.5 the effect was considered as expressed synergistic, in FIC ≤ 0.9 - synergistic, in FIC = 1.0 - additive, with FIC> 1.0 - antagonistic. Results. The disc diffusion method showed that 96% of P. aeruginosa strains had a sensitivity to polymyxin, resistant strains were not detected. The possible effects of a combination of therapeutic doses of antibiotics of different groups (fluoroquinolones, aminoglycosides, cephalosporins, carbopenems) with subinhibitory doses of polymyxin M and B (from 1.0 to 0.25 μg/ml) were investigated experimentally. The study showed additional antimicrobial action of polymyxins and antibiotics of all other groups, except for representatives of carbopenems, with which polymyxin showed a synergistic effect. The effect of polymyxin B in (79.0 ± 3.3)% of cases was not significantly different from the effect of polymyxin M. Subinhibitory concentration of cationic polypeptide from 0.1 to 0.25 μg/m in combination with imipenem from 0.5 to 1.0 μg/ml was shown to prevent the formation of biofilms by test strains of P. aeruginosa. Thus, the strategy of anti-pyocyanic therapy today can be based on the use of cationic polypeptides of polymyxin. Increasing the dose of polymyxin is not a way to optimize their activity against P. aeruginosa in the form of biofilms; combined therapy with other antibiotics may provide great potential opportunities to maximize the effectiveness of polymyxins in minimizing the risk of developing resistance to them. At the same time, prevention of biofilm formation requires lower concentrations of antibiotics than the destruction of biofilm which has already been formed. 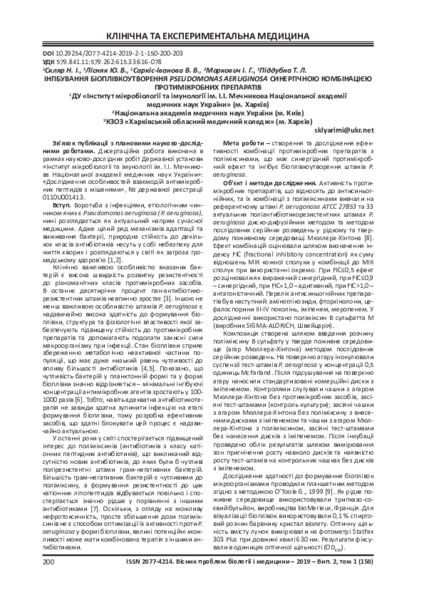