INFLUENCE OF EXPERIMENTAL HYPOTHYROIDISM, INDUCED BY THIAMAZOLE, ON CITOTOPOGRAPHY OF CLITOCIBE NEBULARIS FUNGUS LECTIN RECEPTORS IN THE STRUCTURAL COMPONENTS OF RATS LACRIMAL GLANDS

The lacrimal gland, along with extraocular muscles and adipose body of the orbit refers to an accessory visual structure and is involved in the pathological process of endocrine ophthalmopathy, morphologically manifested by autoimmune dacridoadenitis, as a result of inflammation in the orbit and in tissues of the outer lining of the eye and hemodynamic changes in the lacrimal artery. Molecular markers, used for the study of glycopolymers of structural cell compartments are lectins which are associated with the study of the structure and function of cell membranes, which is important for various pathological conditions. The aim of the study was to study the morphological features and cytotopography of clitocibe neburalis fungus lectin receptors in the structural components of the lacrimal gland in rats under the conditions of experimental thiamazole-induced hypothyroidism. The object and methods of research. Experiments were carried out on 35 mature male rats of the Vistar line, weighing 180-240 g (10 control and 25 experimental), following bioethical rules. Experimental hypothyroidism was caused by daily feeding with thiamazole (®Merkazolil, Zdorovya, Kharkiv) at a rate of 5 mg/kg body weight for two weeks. The investigated material (thyroid and intraorbital lacrimal glands) were taken after euthanasia of animals by overdose of ethereal anesthesia. Fixed in Buen’s solution. Specimen were stained with hematoxylin and eosin. Lectinohistochemical studies were performed using CNFA lectin (Clitocibe nebularis fungus agglutinin) GalNAcβ1-> 4GlcNAc. Visualization of the lectin receptors was carried out, using 3,3 diaminobenzidine tetrahydrochloride in the presence of H2 O2 . The review and photographing of histological preparations was carried out on a microscope «Granum», equipped with the camera «Echoo-Imager 502000» using the program «TopView 3.2». Results. During experimental hypothyroidism in the lacrimal gland, edema and destructive processes are observed both in the terminal secretory sections and in the excretory ducts. Expansion of lumen and thinning of the wall were documented in the acinuses, due to changes in the shape of the epithelium and its local destruction, followed by its desquamation into the lumen of the acinus and the presence of cellular detritus in their lumens, as well as consolidation of the connective tissue around the acinus, infiltration of such acinus by lymphocytes and the formation of lymphoid nodules. Intracellular and interstitial ducts also show signs of destructive processes, such as enlarging of their lumen and desquamation of individual epithelial cells into the lumen of the duct. The intense infiltration of lacrimal gland by lymphocytes during experimental hypothyroidism is likely to indicate the involvement of the lacrimal gland in the immune process. In the lacrimal gland of experimental animals, the CNFA lectin receptors were found to be part of the secretory granules of the supranuclear zone of acinus glandular cells. The accumulation of secretion with the GalNAcβ1-> 4GlcNAc carbohydrate determinants indicates a slowdown in the excretion activity and glycosylation disturbances on the membranes of the Golgi complex. In addition, the accumulation of lectin receptors is documented by us in the cytoplasm of numerous mastocytes, which are localized around the vessels and in the endothelium of these vessels. Conclusions. Experimental studies showed a negative effect of thiamazole-induced hypothyroidism on the morphofunctional features of the lacrimal gland with the onset of inflammation in it, which may cause changes in the outer tissues of the eyeball. CNFA lectin can be considered a molecular marker for monitoring the phases of the secretory cycle of the lacrimal gland and the marker of mast cells. 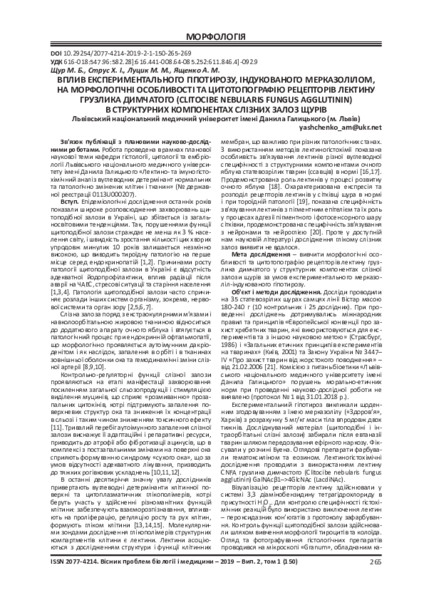