Bulletin of problems biology and medicine / Issue 3 (157), 2020 / MORPHOFUNCTIONAL STATUS OF THE ADRENAL GLANDS UNDER THE ACTION OF A COMPLEX OF DIETARY SUPPLEMENTS (LITERATURE REVIEW)
Bilash S. M., Donchenko S. V

This paper presents a review of the literature with the aim of revealing information about the structure of the adrenal glands of rats and the effect of a complex of dietary supplements on it. In recent decades, the negative impact of environmentally unfavorable factors on the body and the functional activity of human organs and systems has increased, which leads to a violation of their morphofunctional state. Widespread use of nutritional supplements for various purposes in the manufacture, processing, packaging, and storage of products against the background of sometimes quite wide limits of permissible dosage leads to cases of allergic reactions, impaired functions of the respiratory system, endocrine, and nervous systems. There is practically no information about changes in the body when several nutritional supplements arrive that have a proven negative impact on individual systems. Monosodium glutamate might be cause a diversity of clinical disorders comprising asthma, urticaria, angioedema, rhinitis and obesity which is called the “monosodium glutamate symptom complex”. Several studies have linked MSG to many neurological disorders as anxiety, schizophrenia, epilepsy, depression, and degenerative disorders such as Parkinson’s disease and Alzheimer’s disease. When rats were injected with a large amount of monosodium glutamate, a significant decrease in the thickness of the adrenal cortex, loss of parallel arrangement of the zona fasciculata cells, expansion and overflow of capillaries, a large number of macrophages that line the sinusoids, and apoptosis of the nuclei were observed. Sodium nitrite blocks the growth of botulism-causing bacteria (Clostridium botulinum) and prevents spoilage. Sodium nitrite can cause serious poisoning (forms methemoglobin) and lead to paralysis of the vascular center and death. Sodium nitrite has the ability to attach to blood cells and thus prevent oxygen delivery. Also, sodium nitrite can lead to cancer. In an experiment on rats, vasodilation and accumulations of apoptotic cells were observed. Ponceau 4R is widely used in the confectionery industry for the attractiveness of cakes, cookies and others. Scientific studies have shown that there is a relationship between this substance and the occurrence of tumors in laboratory animals. The supplement also has a negative effect on the body – to provoke cancer. Adrenal hypertrophy is observed in the experiment. In addition, Ponso 4R is included in the list of dyes that provoke hyperactivity in children. Thus, the limited data on the influence of a complex of nutritional supplements on adrenal glands, the practical significance of this problem (the use of sodium glutamate, sodium nitrite, and Ponso 4R) is the theoretical basis for formulating the purpose and setting tasks for the research of the dissertation. Therefore, in the absence of sufficient information on the effects of monosodium glutamate, sodium nitrite and Ponceau 4R, this study will be relevant. 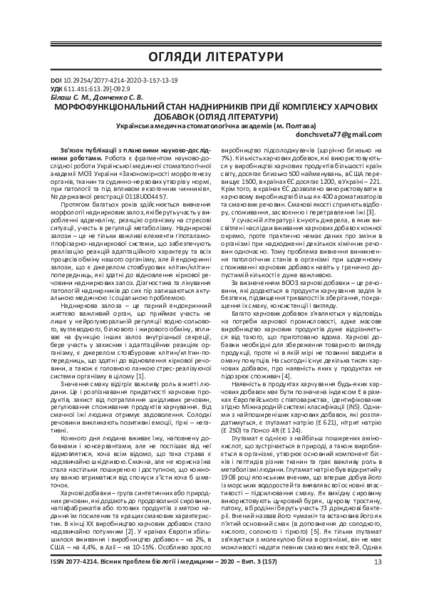