Bulletin of problems biology and medicine / Issue 3 (157), 2020 / STATE OF TRANSCAPILLARY EXCHANGE IN THE CHOICE OF ULTRAFILTRATION TACTICS IN PATIENTS TREATED WITH HEMODIALYSIS
Djalalov M. R.

Goal. Study of intra-and extravascular vascular conditions to select ultrafiltration options and thereby improve the endurance of patients on hemodialysis, as well as affect the quality of life of patients treated for a long time on hemodialysis. Methods. In the medical clinical center in the hemodialysis Department, 45 patients treated with hemodialysis for a long time (more than 10 years) used the Mak-Klür-Oldrica test. The age of the patients was from 20 to 60 years (28 men, 17 women). In 11 patients, the cause of CRF was diabetic nephrosclerosis, in 16 – chronic glomerulonephritis, in 8 – chronic pyelonephritis, in 7 – urolithiasis, in 3 – polycystic kidney disease. Hemodialysis sessions were performed on the device “Frezeius-4008” in which there is a variable ultrafiltration with a break: variable by the hour or an hour or two used ultrafiltration, then stops ultrafiltration, or an hour or two hemodialysis session is performed without ultrafiltration, then ultrafiltration is applied. Results. In 17 patients, diuresis was preserved, in 9-diuresis from 500 to 600 ml, in 19-diuresis was absent. Patients were examined clinically and laboratory, echocardiography and Doppler of peripheral vessels were performed. The Mak-Klür-Oldric test was applied to the lower third of the forearm anterior surface with 0.5 ml intradermal and 2.0 ml under the skin of 0.9% saline solution. In parallel, the Mak-Klür-Oldric test was applied to 18 newly admitted patients treated with hemodialysis. In 10 patients, the saline solution injected under the skin was half dissolved within an hour, and within two hours it completely dissolved and ultrafiltration was abundant for 4 hours. The amount of ultrafiltration during the session was from 500 to 800 ml. In the cardiovascular system, sclerotic changes in the valves, hypertrophy of the left ventricle with the retention of the ejection fraction were diagnosed. In 24 patients, under the skin and intradermally administered saline solution dissolved at the second and third hours, and in these groups of patients for 36 hours of the interdialysis period, the weight gain of the liquid was from 1000 to 1500 ml. The use of ultrafiltration in these patients was for one to three hours so that the fluid could pass from the extracellular to the intracellular sectors. In the cardiovascular system was not noted to change (deterioration of hypertrophie of the left ventricle, seal the heart valves, the increase in myocardial mass). However, 5 patients aged 55 to 70 years had a drop in blood pressure at the end of the hemodialysis session from 20 to 40 mm Hg. Diabetic nephrosclerosis (mainly type II diabetes), chronic glomerulonephritis, chronic pyelonephritis complicated by hypertension, urolithiasis were the cause of chronic kidney disease. Clinically, an increase in the concentration of triglyceride and cholesterol in the range of 6.2 to 7.4 mmol/l, the concentration of albumin in 60-64 g/l figures. Resorption of the introduced saline solution inside the skin lasted up to two and three hours, and under the skin up to three and four hours, the amount of ultrafiltration was from 1250 to 1600 liters. The Mak-Klür-Oldric sample helped identify the potential for fluid exchange between the extracellular and intracellular sectors. In patients treated for a long time with hemodialysis, the state of the vascular walls involved in the exchange of fluid between the internal and external sectors of the vessels and endothelium is a determining factor in the prognosis of quality of life and the cardiovascular system as factors of cardiovascular endurance, as well as the development of hypertension and colloptoid conditions. Conclusions. By evaluating the condition of internal and external vascular sectors and increasing the endurance of patients who live on hemodialysis for a long time by using ultrafiltration, along with other methods of treatment, it is possible to have a moderate impact on the cardiovascular system and improve the quality of life with hemodialysis 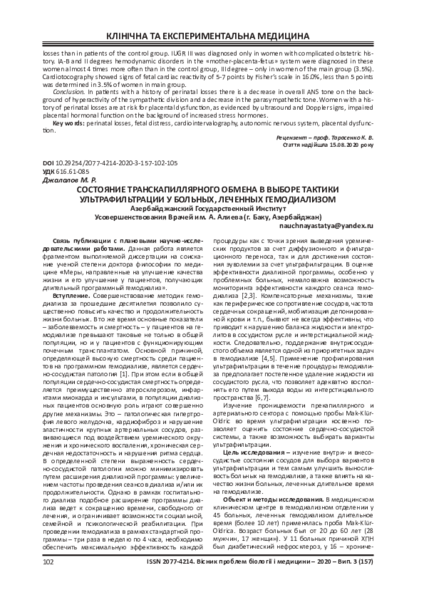