Due to the increase in the incidence of chronic pancreatitis and pancreatic head cancer, the problem of surgical treatment of these patients has still not lost its relevance. The aim of the study was to evaluate the hemostatic system features functioning in conditions of cholemia in patients with focal lesions of the pancreatobiliaric area during the perioperative period. The results of surgical treatment of 272 patients with focal diseases of the pancreatobiliary area complicated by obstructive jaundice were analyzed. All patients were underwent pancreaticoduodenal resection after preoperative preparation (in the main group – according to the developed algorithm, in the control group – without biliary decompression). The analysis of cholemic level decrement shows that the level of bilirubin decreased in both of groups, and when using the original complex of decompression measures (main group), the decrement was almost twice as much. When comparing the indicators of the coagulogram and the level of cholemia, it was found that between them there are negative correlation. Due to the application of our own detoxification algorithm with the use of percutaneous bile drainage in patients of the main group on the third day the level of bilirubinemia averaged 185.1±2.4 μmol/l, while on the fifth day after surgery – already 163.2±2,6 μmol/l and on the eve of the SDA – 112.3±2.7 μmol/l. In the control group, which followed the usual amount of preparation of patients for radical surgery, the initial level of total bilirubin was 269.8±3.2 μmol/l, on the third day – 258.4±2.9 μmol/l, on the fifth – 222,2±3.8 μmol/l, and on the eve of the SDA – 198.3±3.3 μmol/l. Changes in the content of direct and indirect bilirubin were appropriate, and on the eve of the operation in the main group the indicators were 79.0±1.6 μmol/l and 33.3±0.9 μmol/l, respectively. In group II on the eve of surgery,the figure was 150.7±2.3 μmol/l. Thus, in group I after decompression, the decrement of the level of total bilirubin was Δ = -59.1%, direct bilirubin – Δ = -62.5%, and indirect – Δ = -47.6%. On the other hand, in group II, on the eve of traffic regulations, the decrement of the level of total bilirubin was Δ = -26.7%, direct bilirubin – Δ = -27.2%, and indirect – Δ = -25.0%. After pancreaticoduodenal resection, the decrement of bilirubinemia in both groups did not exceed 40% and amounted to 32.7±2.8% in group I and 27.4±1.6% in group II. Signs of dysproteinemia were determined in all examined patients, which may be explained by the toxic effect of bilirubin on protein synthesis and manifestations of cytolytic and mesenchymal-inflammatory syndromes. Thus, the average level of total protein was 48.2±2.4 g/l, albumin – 23.5±2.3 g/l, albumin-globulin ratio – 0.95±0.08. In this case the content of albumin and total protein was in reciprocal relationship with the content of bilirubin, with the increment of the indicator was higher in the main group. Before surgery, diabetes mellitus was diagnosed in 22 patients. In the early postoperative period, decompensation of compensated diabetes was observed in 5 of 11 patients with mild course, in 6 of 8 patients with moderate and in 2 of 3 patients with severe course of diabetes before surgery. 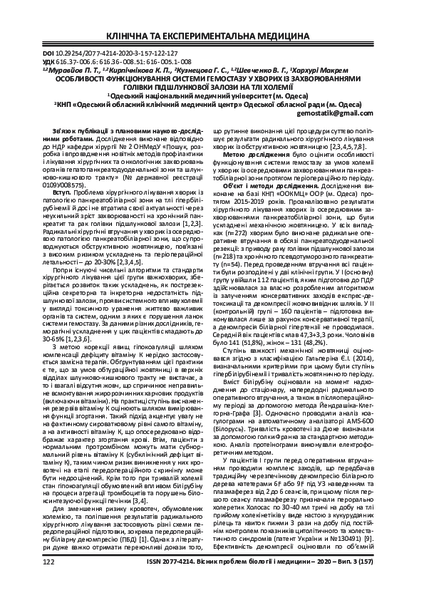