CLINICAL ASPECTS OF FIBROPLASTIC INDURATION OF THE PENIS

Fibroplastic induration of the penis – a disease characterized by fibrous lesions of the protein shell of the corpora cavernosa. Manifested in the form of focal compaction of the protein shell of the penis. The prevalence of Peyronie’s disease (PE) among men over the age of 40 who see a doctor, according to various authors, ranges from 0.3% to 7.1%, increasing with age, and according to autopsies reaches 25%. The aim of the study was to establish the effectiveness of conservative and surgical methods of treatment of fibroplastic induration of the penis. The analysis of treatment of 49 men aged from 37 to 74 years (45.3±11.9 years) in the urological clinic of KP «Poltava OKL them. M.V. Sklifosovsky» POR for 10 years (2010-2020). Patients were divided into groups according to the following criteria of manifestation of the underlying disease: pain, curvature of the penis with an angle of up to 30º and more than 30º, as well as the direction of curvature – dorsal, lateral and ventral. Depending on the severity of the disease, patients were divided into groups, some of which were subject to conservative treatment, and others to surgery. In turn, surgical treatments were performed by three methods, namely: Nesbit-type surgery, closure of the defect of the protein shell by the autoderm and neurovascular-preserving replacement corporoplasty with a wide fascia of the thigh. Conservative therapy for CP is performed in patients with mild pain and preserved copulatory function in order to stabilize the pathological process as the first stage of treatment. Plication operations aimed at eliminating the pain syndrome and preserving copulatory function in CP are highly effective for small fibrous plaques and simple sexual deformities. In this case, the key to successful treatment is the removal of fibrous plaque within the unaltered protein shell. Neurovascular-preserving replacement corporoplasty with a wide fascia of the thigh in defects of the protein shell of large sizes is an effective method of surgical treatment of CP, which avoids deformation of the penis, pain and preserves copulatory function. 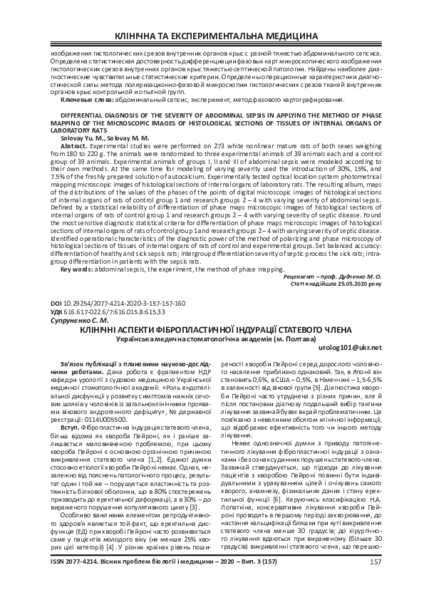