Bulletin of problems biology and medicine / Issue 3 (157), 2020 / ELECTRONIC-MICROSCOPIC CHANGES OF THE SPLEEN UNDER THE ACTION OF SODIUM GLUTAMATE AND THEIR CORRECTION BY ORLISTAT
Harapko T. V., Mateshuk-Vatseba L. R.

.Sodium glutamate is the sodium salt of glutamic acid, which is widely used as a flavor enhancer in food. The aim of the study was to study submicroscopic changes of structural components of the spleen of rats under the action of monosodium glutamate and their correction by orlistat (xenical). Methods. This experimental study was performed on 56 white male and female rats of reproductive age (2.5- 5.5 months) weighing 120-250 g. For six weeks, the animals received sodium glutamate daily with food at a dose of 0.07 g/kg body weight, after which they switched to a standard diet with the addition of orlistat (xenical) at a dose of 4,5 mg/kg for two, four and six weeks. Sections of the spleen were made on an ultramicrotome UMTP-6M with a diamond knife (DIATOM) and double contrast was performed according to Reynolds and uranyl acetate. Submicroscopic examinations of the organ were performed using an electron transmission microscope TEM-100. The test material was documented using a SONY-H9 digital camera. Results. After six weeks of exposure to monosodium glutamate, profound destructive changes in cell composition and vascular components were detected in the parenchyma of the spleen. In particular, the number of lymphocytes with signs of apoptosis at different stages (karyopyknosis, karryorhexis, karyolysis) increased significantly, the number of cells with signs of mitosis decreased. There are whole zones of neurophilic and basophilic granulocytes. The nuclei of macrophages are slightly reduced, contain lumens condensed by heterochromatin, the cytoplasm is loaded with fragments of other cells, parts of erythrocytes, siderophages and osmophilic (fatty) inclusions. The periarterial zone is dominated by small and medium lymphocytes, there are signs of edema. Small and medium lymphocytes are concentrated in the mantle zone. Significantly increased in the field of view of the microscope the number of megakaryocytes over the entire area of the parenchyma of the organ. The red pulp is full-blooded, contains areas of accumulation of deformed blood cells, polysegmental neutrophils and megakaryocytes. Blood capillaries with reduced lumen due to edema of endothelial nuclei and their protrusion into the lumen. The basement membrane is swollen, layered, swelling around the vessels. After six weeks of correction of the changes with orlistat revealed a significant reduction in the number of destructively altered cells, the number of myeloid cells and plethora of blood vessels in the parenchyma of the organ. The intercellular spaces are somewhat dilated, there are signs of edema in the vascular spaces. In some lymphocytes the nucleolus is not clearly expressed, the karyolema is not equal, the cytoplasm is enlightened. The number of osmophilic (fat) inclusions decreased both in the intercellular space and in the cytoplasm of cells. Conclusions. Therefore, orlistat has a positive effect on the components of the spleen, the changes in which were caused by the action of sodium glutamate. 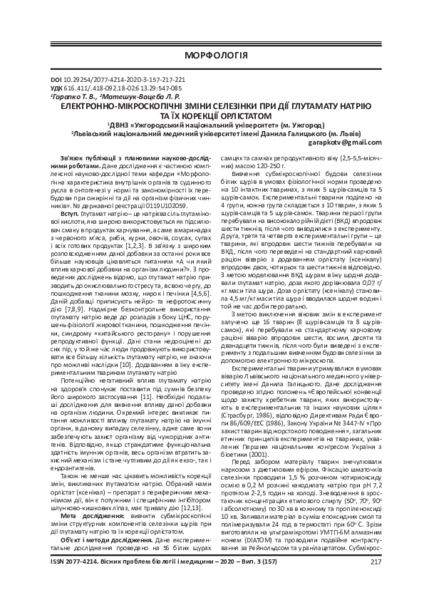