Aim. Breast cancer (BC) is a heterogeneous disease which develops under the selective “pressure” of the tumor microenvironment. Therefore, it is promising and important to study tumor-associated macrophages as the innate immunity cells. The innate immunity system supposedly is able to regulate tumor immune surveillance and does not necessarily require the innate link. Object and methods. Materials of the study were intraoperative tissue of tumors and ipsilateral lymph nodes in radical mastectomy. Immunohistochemical characteristics of removed tumors (ER, PR, HER2, Ki67) were used for organizing two balanced groups of patients with primary BC. In the first group, there were no metastases into the regional lymph nodes, N0, whereas in the second one there was primary metastatic BC, N1. The groups included three patients with non-luminal HER2+, luminal A, luminal HER2-negative, luminal HER2+, and triple-negative BC, with 15 patients in each group, with a total of 30 patients. Results. The main idea of the work was to find the differences between the quantities of CD68+ and CD163+ macrophages, localized in tumor biopsy samples between the groups of patients with non-metastatic BC (N0) and with metastases (N1), balanced by the clinical values of ER, PR, HER2 (non-luminal HER2+, luminal A, luminal B HER2+, luminal B HER2-, and triple-negative BC). The results of statistical processing of average quantitative indicators of CD68+TAM, CD163+M2-like macrophages and CD68/CD163 (macrophage index M1) between groups N0 and N1 did not reveal a significant difference. However, when comparing the calculated immune-positive macrophages from all fields of view (40×lens), which were 5-17 for each specimen, a significant increase in CD68+TAM in the metastasis group was established. Comparison of average quantitative indicators of CD68+, CD163+ and CD68/CD163 between groups BC N0 and N1 showed no significant differences (the Mann-Whitney test). We determined the IHC characteristics of BC for each biopsy sample, including Ki67 and G-grade. Therefore, a statistical check of their correlation relationships with average quantitative indicators of CD68+, CD163+ and CD68/CD163 macrophages was conducted, which revealed a reliable relationship between CD68+ and Ki67, expressed as a percentage, and between ER/PR (in the clinical interpretation: +/-) and CD68+, CD163+, but not CD68/CD163.Conclusions. 1. The number of CD68+TAM was significantly higher in the focus of the primary BC of patients with metastases in the regional lymph nodes. 2. We detected a reverse correlation between CD68+TAM, CD163+M2-like macrophages and the clinical value of ER/PR. Consequently, an increase in the number of TAMs (in particular, M2) in the primary ER+/ PR+BC with metastases may not have a predictive value for metastasis, or ER+/PR+ BC possibly metastasizes without a significant increase in TAM. 3. The revealed differences are confirmed by reliable statistical calculations and relate to the effect of an exceptionally pathological process, since patients did not receive treatment before radical mastectomy. 4. Interpretation of personal data on the number of CD68+TAM and CD163+M2- like macrophages still needs to be developed. 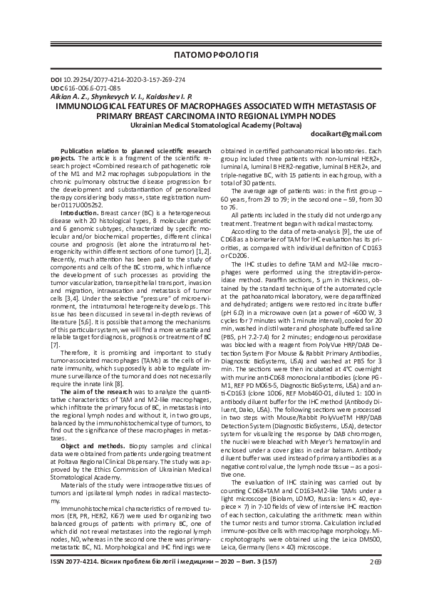