Bulletin of problems biology and medicine / Issue 4 Part 1 (153), 2019 / DETERMINATION OF THE IMPACT OF HEAVY METALS ON EMBRYOGENESIS IN RATS
Shatorna V. F., Garets V. I., Kononova I. I., Slesarenko O. G.


DETERMINATION OF THE IMPACT OF HEAVY METALS ON EMBRYOGENESIS IN RATS

Lead and cadmium as polluting the environment and classical toxicants continue to remain the focus of not only ecologists, toxicologists and hygienists, but also pathologists, morphologists and clinicians. This is due to the fact that in the relatively short historical period the content of these potentially toxic chemical compounds in the environment has increased in dozens or even hundreds of times, and most importantly, it has acquired a global character. Due to the ability of these heavy metals and their compounds to cumulation in the body, even the effect at low concentrations leads to significant disruption of the body. The influence of heavy metals occurs on the morphological structures of the embryo, provoking a number of diseases. The experimental effects of heavy metals on the embryogenesis in the experimental animals are quite controversial and depend on the dose, method of administration and duration of exposure, so comparisons are rather complicated. Thus, the study of bioeffects of the influence of various toxic elements on the body of pregnant females and on the embryo – the topic is important and requires an active scientific research. Purpose of the study. To conduct a comparative analysis of the embryotoxicity of lead acetate and cadmium chloride in intragastric administration in an experiment on rats. Object and methods. Investigation of the effects of cadmium and lead compounds on white rats of the “Wistar” line. For researches, low doses of metals were chosen that reflect the actual ratio of these in the daily human rations of the industrial region. The test substances were administered to the females throughout the pregnancy in a hemorrhagic state, the first day of pregnancy was determined using the method of vaginal stroke All rats were divided into 5 groups: 1 group – control, 2 group – animals, which were injected with lead acetate solution at a dose of 0.05 mg/kg; Group 3 – animals that were administered a solution of cadmium chloride was injected at a dose of 1.0 mg/kg; Group 4 – combined administration of lead acetate at a dose of 0.05 mg/kg and selenium citrate at a dose of 0.1 mg/kg; Group 5 – combined administration of cadmium chloride at a dose of 1.0 mg/kg and selenium citrate at a dose of 0.1 mg/kg. Animals were taken from an experiment on the 20th day of pregnancy by overdose of etheric anesthesia and extracted embryos from the uterus for further study. The probable negative effect of the test substance on embryonic development was judged by the ability to increase the level of embryonic mortality (embryoal effect) and cause external and structural defects in the development of internal organs (teratogenic effect); the overall development of embryos was evaluated by the number of embryos, the number of yellow fetuses in the ovaries of females, the body mass of the embryo, and its compliance with the developmental stage according to generally accepted criteria for embryonic development of rats. The overall embryonic mortality was determined and the preimplantation and post-implantation mortality rates were calculated, which made it possible to determine the embryotoxicity of the substances studied. The analysis of the experiment showed that the total embryonic mortality in both groups of intoxication was significantly (p <0.01) increased compared to control values, which led to a decrease in the number of embryos and indicated the embryotoxic effects of lead acetate and cadmium chloride at the indicated doses for enteral administration in an experiment on rats. There was no teratogenic effect in experimental groups. The conducted experimental study suggests that the introduction of solutions of low doses of cadmium chloride or lead acetate throughout the entire gestational period to the female rats causes an embryotoxic effect, which manifests itself in lowering the numbers of live embryos and increasing the rates of embryonic mortality. A comparison of the results of the experimental study suggests that the effect of lead acetate leads to a higher level of total embryonic mortality of rats under experimental conditions. The combined administration of selenium citrate with heavy metal salts leads to a decrease in the embryotoxic effect of lead and cadmium both in the preimplantation and postimplantation period. 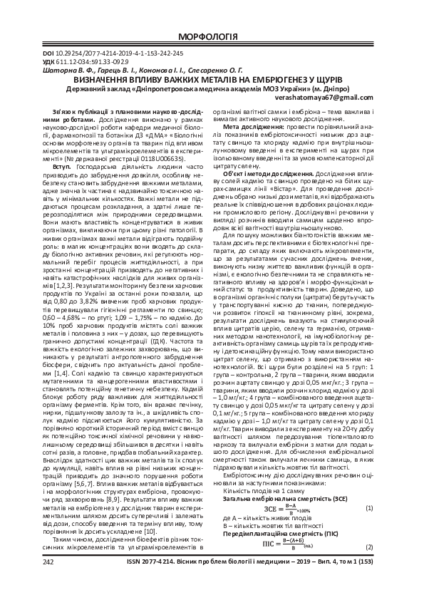